Everything you need to know about drones with night vision

Public safety agencies and emergency inspection crews use drones every day to assist them on their missions. These highly-mobile aerial cameras can be deployed within minutes to cover vast, challenging terrains more swiftly and effectively than conventional ground-based tools. This capability is proving to be a huge advantage for first responders who need every bit of information they can get to make the right decisions. But the reality is that oftentimes duty calls when the sun has already set. The majority of emergency search and rescue (SAR) operations take place at night when visibility is at a minimum. To provide first responders with an added margin of safety and immediate scene recognition in the dark, DJI has developed drones with night vision capabilities.

What is night vision technology?

Let’s start with a little background. Human vision is limited to a small section of the electromagnetic spectrum known as visible light. Other portions of the spectrum – radio, infrared, ultraviolet, X-ray, gamma-ray – cannot be perceived by the naked eye. A camera, on the other hand, can pick up different wavelengths of light if it’s equipped with the right sensors.

Thermal imaging works by detecting the heat energy, or heat signature, that’s emitted naturally by both animate and inanimate objects. Thermal cameras house a highly-sophisticated lens and sensor system that allows invisible infrared frequencies to pass through so that the surface temperature of an object can be measured. The resultant data is used by the image processor to create what is known as a thermogram or a color map displaying different temperature values.

At night after the sun sets, ground and environmental temperatures cool, while the bodies of missing people are warmer. It’s this thermal difference that is detectable, which makes thermal drones an important night vision solution.

Although highly sensitive, thermal cameras can be affected by numerous factors such as the time of day, surface conditions, and an object’s reflectivity. In such scenarios, starlight/low-light sensors can complete the puzzle for first responders.

A sample image from the SAR Altitude Guide.

Low-light sensors work on the principle of collecting whatever small amounts of light are available from sources such as starlight or moonlight and amplifying it to achieve better vision.

In the past, night vision cameras with starlight sensors made use of a technology called optoelectronic image enhancement. Here, light would pass through a series of lenses and an image-intensifier tube which would convert the incoming photons into electrons. These electrons would then hit a phosphor-coated screen, creating the characteristic glowing green images you may have seen in spy movies or games such as “Call of Duty”.

Modern starlight sensors leverage a technique called digital image enhancement, which is a newer version of the traditional light amplification technology. In digital image enhancement, a CMOS sensor is used to convert light into digital signals. These signals are then enhanced electronically and magnified several times for clarity before being projected onto a screen as visible light images.

Starlight sensors have a wider aperture and reduced shutter speed so that more light can reach the camera. The sensors work alongside algorithms that suppress image noise and enhance image quality. Night vision drones employ digital image enhancement because it allows for more compact, lightweight, and versatile payloads.

Which DJI drones have night vision?

For quick identification of objects on the site, this highly versatile yet compact drone packs in dual sensors – an HD 640×512 px thermal resolution camera and a 48MP visual camera with a 1/2” CMOS sensor. You can switch between visual, thermal, or split-view feeds for different mission requirements such as searching for missing people, identifying illegal poachers after dark, and nighttime patrols of mines, construction sites, and other sensitive areas. You will also find a spot meter to check individual heat points and an area measurement tool to get the temperature gradient of a selected area.

With 55 minutes of flight time and a wide-angle FPV camera, the M300 RTK ensures effective oversight, no matter how remote the mission. Pair it with the H20T quad-sensor solution and you can see what is invisible to the human eye, whether you’re carrying out a search and rescue mission or securing a location after dark. The H20T comes with a 20 MP zoom camera, 12 MP wide camera, a Laser Range Finder covering distances from 3m-1200m, and a 640×512 px radiometric thermal camera.

Designed specifically for nighttime operations, the H20N is the latest payload from DJI for use with the M300 RTK drone. The sensor combines two starlight-grade cameras with wide and zoom capabilities, dual 640×512 px thermal sensors with 2×\8× optical zoom, and a laser rangefinder with a detection range from 3-1200m. These hybrid payloads are most powerful when used in conjunction with one another. In low-light and challenging conditions, you can enhance visibility dramatically by simultaneously zooming on a split-screen with both the thermal and visual sensors.

Can you tell the difference between the H20N and the H20T? If you look closely, the H20N has an extra thermal zoom lens on its top left corner. Click here for a complete comparison between the H20N vs the H20T.

A rugged new DJI flagship drone that fits in a backpack, the M30T integrates a 48MP 1/2” CMOS sensor zoom camera with 16× optical and 200× digital zoom, a 12MP wide-angle camera, a laser rangefinder with a detection range from 3-1200m, and 640×512 px radiometric thermal camera for night vision. Beyond this thermal sensor, the M30T’s FPV camera has been optimized for low-light conditions – a capability that makes it easier to fly safely at night without having to worry about crashing into a hill during a search and rescue mission.

What you need to know about flying night vision drones

FAA rules for flying at night

According to the Federal Aviation Administration (FAA) Operations Over People rule that came into effect last year, drone pilots operating under Part 107 may fly at night without a waiver as long as they fulfill the following requirements:

Mavic 2 Enterprise Advanced: The M2EA Beacon accessory indicates the location of the aircraft at night to comply with night-ops regulations.

Matrice 300 RTK: Pre-installed safety beacons on both the top and the bottom of the drone allow the aircraft to be identified at night or in low-light conditions.

While it’s completely legal to fly a drone at night, airspace authorizations are still required for night operations in controlled airspace under 400 feet. These can be obtained in near real-time through FAA-approved providers of Low Altitude Authorization and Notification Capability (LAANC) services.

Regular GEO zone and FlySafe restrictions still apply. If you need to unlock a GEO zone, refer to our step-by-step guide here.

No matter how many hours of flight time you have under your belt, it’s always a good idea to follow drone safety tips to avoid any mishaps. 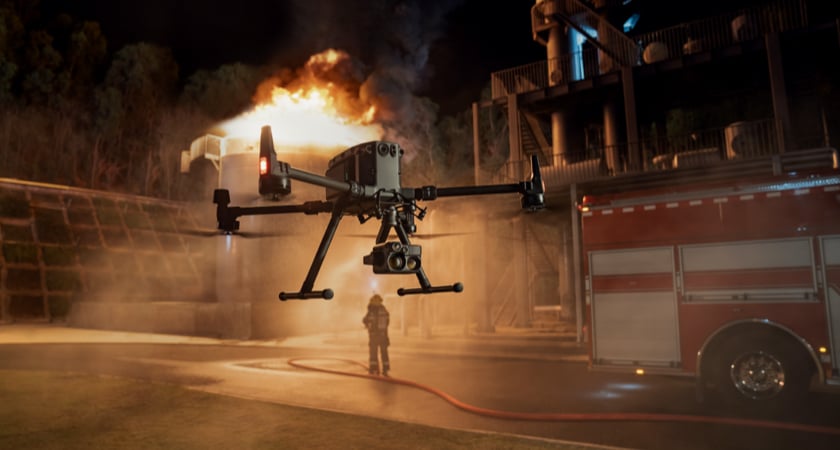 What are night vision drones used for?

There are quite a few situations when drones need to be flown in poor-to-nil visible light conditions.

The utility of night vision drones in search and rescue operations cannot be overstated. Being able to find the heat signature of a human in distress can be the crucial difference between life and death. Managing rescue missions in deep forests or after natural disasters such as an avalanche is a complex undertaking. Drones with night vision cameras can help keep an accurate track of victims and rescue personnel alike.

Police officers are called in to deal with many different types of incidents at night. These could range from supporting vulnerable persons to dealing with serious and organized crime. When it’s crucial to minimize the risk for the public as well as the subject while maximizing the safety of the officers, night vision drones can be deployed to gather situational intelligence and track a suspect’s movements even in total darkness.

Thermal cameras and starlight sensors can serve as essential tools for threat detection when hazmat or emergency relief teams need to navigate quickly and safely through dark and unpredictable areas. From uncovering violent chemical threats in seemingly harmless places to getting an upper hand on wildfires even after the sun goes down and helicopter operations need to be halted, night vision drones have become a force multiplier that keeps crews safe while letting them accomplish more on every mission.

Large industrial sites and other areas of strategic importance can add an extra layer of security to their perimeter by conducting nighttime surveillance with drones. And in the case of an emergency, such as a power outage, crews can quickly inspect the changes in heat signatures of different components and find out where the malfunctioning unit is located. Many types of industrial and construction inspections can also take place at night with the help of night vision drones.

Thermal imaging sensors are one of the most effective ways of locating animals – be it for wildlife counts, habitat mapping, behavioral observation, or providing medical attention after a forest fire. Further, with night vision drones, poachers can be located both during the day and at night. In Kenya, for example, drones have helped to bring down the number of illegally killed elephants dramatically, getting over 300 poachers arrested in the process and helping seize more than 1,000 kg of ivory.

DJI drones are purpose-built for demanding night operations. Explore the right drone for your mission today